The World Of Khoras - Fauna and Flora - Fauna - Desert

A sand shifter is a creature composed entirely of sand. It moves and shapes itself quickly and easily. In combat, it often will form its shape to resemble its opponent. Sand shifters can vary their size and volume, but generally consist of about one ton of sand... enough to form a warhorse sized figure or a large humanoid. The sand shifter does not need to walk or run, it simply shifts its base through the sand. Sand shifters can move very quickly through the desert dunes and can easily outrun a human. When moving through the desert, they stay near the surface and resemble a wave of sand similar to a wave on the ocean. 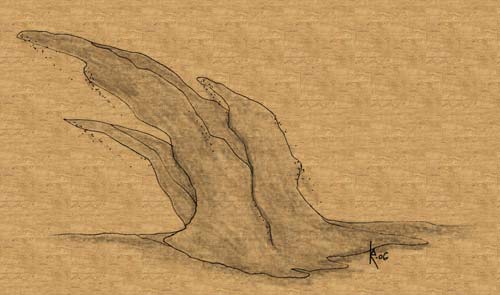 Sand shifters will never voluntarily leave the sand or lose contact with the desert. Sand shifters may have difficulty reaching a person standing on a pile of rocks.

Fire and flame have little effect on sand shifters. Cold is only effective if there is sufficient moisture in the air or sand to freeze the sand. This is rare in the desert. However, the combination of water and cold could possibly freeze a sand shifter solid.

Lightning is very effective against sand shifters and electrical energy will stun a sand shifter temporarily, causing it to dissolve in regular sand for a short while.

Desiccated mummified corpses litter the area around a sand shifter lair. Treasure and weapons from previous victims may lie out in the open, a tempting bait to new victims.

The true nature of the sand shifter is known to very few. In actuality, the sand shifter is a colony creature... actually consisting of thousands of tiny red crystalline creatures. These tiny crystalline creatures are very small and, when mixed in with the sand, difficult to see and they work in unison, exerting telekinetic control, over the sand. 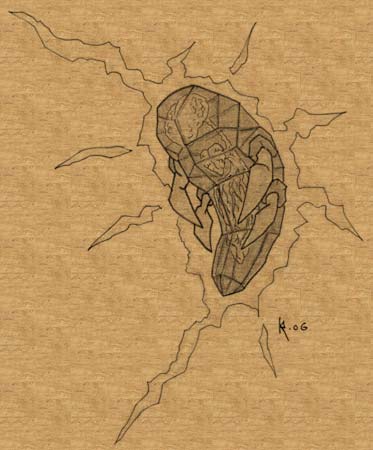 The tiny crystalline sandshifter mites are valuable as an alchemical and magical component. Several hundred of them can be ground up into a brilliant red, sparkling crystalline powder. Due to the rarity of the creature and difficult in obtaining the creatures, this sandshifter mite powder is extremely rare and quite valuable. It is a potent addition for potions and spells that involve telekinesis.