The World Of Khoras - The Cultured Races - Greater Races

The phellysians are a feline/humanoid fusion - a perfect blend of cat and human. The average phellysian is about 1.5 meters (5 ft) tall and 55 kilograms (120 pounds). The entire body of the phellysian is fur covered. Other feline features include high set, swept back ears, a tail, whiskers and retractable claws. The phellysian leg is structurally like that of a cat and, like cats, they walk on their toes with a high ankle joint.  Phellysians run on all fours when speed is required. They are capable of bipedal movement, but such movement is slower and has a slight hopping to it. They tend to mix their movements with the occasional pounce or jump. Phellysians live to be about 70 years old. 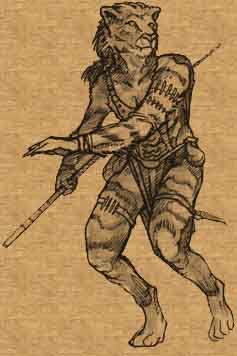 The religion of the phellysians is centered on the Cat Lord, Rexilar, a mysterious being that represents the spirit of the phellysian race. The Cat Lord rules over the nine lesser lords, the House Lords. These demigods each rule over one subrace and characteristic of the Phellysians : Bobcat, kindness (Brie); Cheetah, speed (Chhessa); Cougar, wisdom (Colgan); Jaguar, knowledge (Jaggai); Lion, courage (Lionei); Leopard, stealth (Lopar); Lynx, honor (Losse); Panther, battle skill (Pathria); Tiger, strength (Tigrra). Most creation myths state that the phellysians were once one race but were split into nine. According to legend, in the far future, the Cat Lord will gather his children, reunite them into one race and allow them to ascend with him into a higher realm. An annual celebration is conducted wherein the unification and ascendance is acted out. This festival is hosted by a different house each year; the largest tribe of each house holds it.

Magic is somewhat less prevalent in this society than in others. Phellysian mages are about 1 in 2500. Magic is considered rare and wondrous. Phellysians regard it with awe. Enchanted objects are greatly prized by this culture. No laws restrict the use of magic and its applications are limited due to its scarcity.

Talis, the phellysian homeland, is a large subtropical grassland broken up by rough lands, rolling hills and sparse trees. The dry, sandy soil of the region limits agriculture while vegetation is a mix of temperate and tropical. The climate is warm, dry and windy. Resources of the region include: herbs, spices and a variety of fruits. Talis is bordered on the north by Bathynia and on the south by the Karthasian jungles.

The phellysian population is very spread out. Communities tend to be very small and there are many of them. A community is almost always entirely of the same House with the exception of visitors. Due to their small size and other characteristics, Phellysian communities are highly mobile.

The phellysian language is a beautiful, soft language. Vowels take precedence over consonants. This results in a language with very few harsh sounds. It is similar to and often compared to the musical and more complex elvish tongue. Other languages that are commonly known by the phellysians are: Karthic, Bathyn and various human tongues. Racial literacy is about 10%. Very little literature exists. Instead, most poetry, histories, stories, etc. are oral. Phellysian art consists of wood carvings, oil paintings on trellock leaves, song and dance.

The phellysians are hunter/gatherers due to their environment. Soil conditions prohibit efficient agriculture. However, game animals are plentiful as are many varieties of edible plant life. Nuts, berries and herbs are a common part of the phellysian diet. Phellysians are carnivores and meat is an important part of their diet. In fact, if they do not have meat as a regular part of their diet, they gradually become sick and susceptible to disease.

Cocoa, chocolate and similar foodstuffs are lethal to phellysians. Even one small cup of cocoa (which can be found in abundance in Myria or the Pirate Isles) will kill an average adult Phellysian.

Phellysian technology is slightly lower than the human norm. Phellysians are capable of forging simple metals : copper and iron. Armor is usually not worn and therefore the technology is limited in that area. Tools and weapons are usually bone, wood and leather. The few metal tools and weapons that are used or copper or iron. Architecture is traditionally large, sturdy "tent houses". These are formed by wooden structures covered by animal skins or trellock leaves sewn together. These structures are suitable for the warm, dry climate and are easily taken down and set up.

Animals are not commonly used by phellysians. Most land animals and birds are used as food. Canines are belligerent toward phellysians and not trainable. Horses are the animal of the bathyns to the north and so are viewed as a beast not fit for a phellysian. Occasionally, rare animals, especially drakes, are taken as pets.

Transportation is limited to foot travel, carts and wagons. Long distance communication is usually done through Phellysian runners or in rare circumstances, by a drake.

Ownership and inheritance customs are very similar to the human standards. The economic system is based on trade and barter. No form of phellysian currency exists. The phellysians do use foreign currency when dealing with other cultures.

Gender differences in rights and responsibilities are only loosely enforced. Generally, the males hunt and defend, while the females care for the young. However, variations are not uncommon.

The phellysian marriage system is monogamous. A simple outdoor ceremony with friends and family is common. Before the marriage ritual, or if a phellysian does not engage in the ritual, mating with multiple partners is socially acceptable. The phellysian are unique in their marital beliefs: once two phellysians mate, it is forever. This union transcends even death. If death occurs, a phellysian will not take a second mate. Divorce is an extreme rarity, but has occurred. The two simply part ways. The female always keeps the children.

The family conforms to the norm: mother, father, children in a separate household. Family is extremely important to the phellysians. Only the grum hold the concept of family in higher regard. The phellysians proudly trace genealogical lines.

Usually the female bears one litter of one to four cubs. The gestation period of a litter is 5 months. On occasion, she will bear a second litter and rarely, a third.

Children are born with a strong instinctual knowledge. This is supplemented by imitating the parents. When old enough, the children gather into groups and are taught by the elders. Discipline is lax compared with other races. Recreation is common and takes many forms. Each child comes of age at varying points. It is for the elderket (see below) to choose when this occurs, based on the behavior of the child.

The phellysians believe that each soul is a part of the Cat Lord’s Oversoul. When one phellysian dies, another is born somewhere in the world. This continuous cycle of rebirth into the Oversoul will continue until the day when the Cat Lord comes for his children. Funeral customs vary by house. Usually, the remains are buried in large cairns on traditional burial grounds which are revered by phellysians (no hunting upon such grounds, no battles, etc).

Like their language, vowels take precedence over consonants in the names and names have very few harsh sounds. This is somewhat similar to elven names. Examples of phellysian names: Cyannis, Syrel, Hrissa, Shayo’a, Leynissa, Husuri and Tenassa. Phellysians will often introduce themselves by their personal name and tribal name. For instance, "I am Leynissa of the Lorra tribe".

Social stratification is minimal. All phellysians are considered equal. The only variation is that each phellysian is judged on the basis of age, experience and skills. Therefore, elders and masters of a craft command much respect.

No organized laws or political system exists. Each tribe is ruled by an elderket, the oldest and wisest phellysian, and a council of elders. All members are bound to the tribe by honor. No law enforcement is needed. Those who rarely transgress tradition are dealt with by the Council. Customs are traditions are passed down primarily orally. Each clan has may villages within and the clan is ruled by a council made up of all village elderkets.

Each tribe is able to muster a small war party if needed. This occurs often along the Bathynian border. Many tribes may unite in times of great need. All tribal war parties can form into an army of several thousand. These war parties are generally recon, assault and skirmish using knowledge of the land and guerrilla tactics. Generally, phellysians group into five member teams called talons which in turn group into larger groups called claws.

Ceremonies are common and vary from tribe to tribe. Once each year there is a large gathering held in which many tribes gather. This gathering, called Verral, is held by a different house each year.